Four Top Malaysian Teams Will Compete in the UniPin SEACA 2021 Grand Final, One of the Largest Esports Tournaments in SEA KUALA LUMPUR, MALAYSIA - Media OutReach - 14 July 2021 - Geek Fam Ladies and Richie Angels won the Ladies Tournament on Sunday (4/7) bringing the UniPin SEACA 2021 Malaysia Qualifier to an end. Both teams will join FANX MY and RSG, who have beaten 14 other teams in the final Open Tournament, to represent Malaysia in UniPin SEACA 2021 Grand Final. All qualifying South-East Asia teams will compete in the final stage this November. Each country will be represented by four teams to compete for the most prestigious title as the winner of the UniPin SEACA 2021. 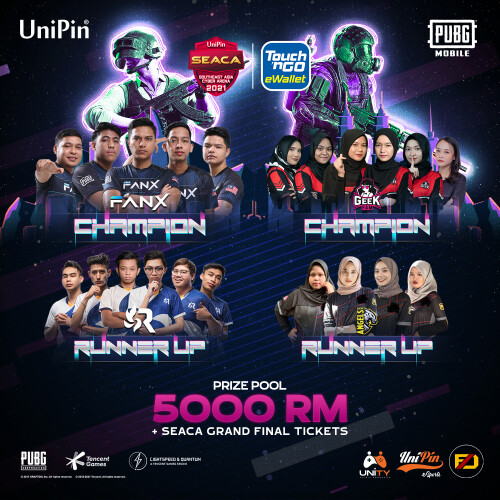 UniPin collaborates with Touch 'n Go eWallet, Malaysia's predominantly most popular digital wallet for Malaysians, to run this year's SEACA 2021 Malaysia Qualifier. It began with the UniPin SEACA 2021 Malaysia Open Tournament which was held online from 23 to 27 June 2021. For four days, 144 teams nationwide went through 3 qualifier days to face 8 invitation teams in the final. The special invited teams were RSG, DINGOZ Esports, Farang Esports, Evos VIP, FANX MY, MIRI MOB Ryzen Era, RHG Rogue and NSEA. At the end of the day, FANX MY and RSG came out as two of the best teams in the tournament. FANX MY scored 3 times winner winner chicken dinner and achieved 104 points in totals, while RSG came in second with a total of 65 points.

Following the Open Tournament, the Ladies Tournament was held online from 1st to 4th July 2021. A total of 57 ladies esports teams nationwide joined the two days qualifier stage. They were split into four groups in the early stage, where each group consisted of 14 teams. To score points for the scoreboard, every team went through two different maps, Miramar and Erangel .

Only the top 32 teams on the scoreboard qualify for the second day. Finally, only eight teams advanced to the final round. The eight teams in the final round are DR SC PPG, AURORA ACE ATHENA, KING MY SCARLET, FLORA, IVICT SASSY, Bapak Vixens, ESA ASTRA RUBBIES, and VIP MYSTERIOUS VIXENS.

Geek Fam Ladies claimed the top position with a total of 107 points and Richie Angels followed in second place with a total of 74 points. They will be representing Malaysia for the final stage by becoming the top teams in the Ladies Tournament. All four winning teams have also won RM 5,000 in total. Then they will compete in the final to win the 15,000 USD prize pool. The final stage is scheduled to take place in Jakarta, November 2021.

Even though this is the first ladies tournament held by UniPin SEACA, the tournament has received a huge appreciation from the esports communities across the country. The final tournament itself has attracted over 17,000 livestream viewers due to the exciting matches between all participating teams.

For more updates on the next tournament of the four Malaysian teams in UniPin SEACA 2021, please visit seaca.gg or the official Instagram account @seaca.gg. All previous tournament videos can be watched on the

UniPin Malaysia Facebook page. The whole UniPin SEACA 2021 event is presented by UniPin Community (UNITY) and all details about UNITY can be directly accessed on Instagram