KUALA LUMPUR, MALAYSIA - Media OutReach - 28 April 2021 - As we age, the possibility of Parkinson's Disease becomes real. It is common that people affected by this disease are not aware of its impact and how to manage its symptoms effectively and confidently. In conjunction with World Parkinson's Day this April, CERTAINTY would like us to take some time to understand how this neurological disease can significantly impact the lives of the people it affects, especially when it comes to Activities of Daily Living (ADL). 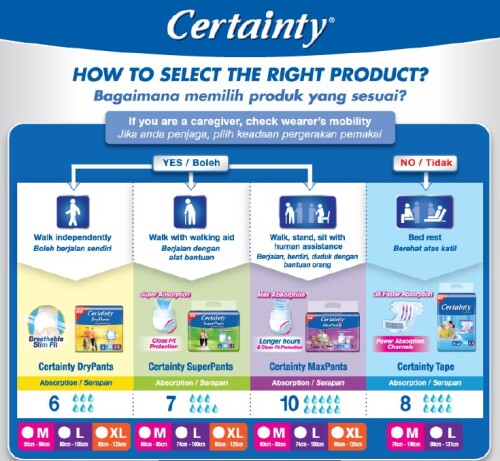 Today, there are more than 20,000 Malaysians diagnosed with Parkinson's diseaseand this number is only expected to rise as we move towards becoming an ageing nation.

Due to this decrease in dopamine, a Parkinson's patient's movements are affected, resulting in common symptoms like tremors or trembling in the hands, arms, legs, jaw or head; stiffness or rigidity in the limbs and body; unusually slow movement; and impaired balance and coordination.

Those affected find it difficult to start or stop moving, and control fine movements like gripping a pen and writing, as well as being prone to falling, making it challenging for them to carry out ADL. Their facial expressions can also become stiff, affecting their ability to communicate non-verbally. All these symptoms initially manifest subtly, e.g. the person might find it just a bit more difficult to get out of a chair or their bed, but will eventually progress if left untreated.

In addition, those living with Parkinson's disease might experience symptoms like difficulty in chewing, swallowing and speaking; mood changes like depression and apathy; sleep problems; skin problems; cognitive issues; constipation; and urinary problems like incontinence.

All of these symptoms can have a profound impact on the patient's quality of life.

Although the cause of Parkinson's disease is still unknown and there is no cure for the condition, there are a number of treatments that can help patients control their symptoms for a better quality of life. These include medication, surgery and supportive therapy[1].

There are a variety of medicines available to treat Parkinson's disease. Some are used during the early stages of the disease, while some are prescribed for the more advanced stages. The drugs can be quite effective in controlling the symptoms of the disease, but will eventually lose their effect over time.

The surgical option available for advanced Parkinson's patients who do not respond well, or have stopped responding, to medication is deep brain stimulation. This is where electrodes are placed in certain parts of the brain and linked to a neurostimulator (also known as a brain pacemaker) in the chest, which generates electrical impulses to help control the symptoms of the disease.

Supportive therapies like physiotherapy, occupational therapy and speech therapy, plus lifestyle modifications like exercise and dietary changes, can also help to ease the symptoms of this condition.

Physiotherapy can help a Parkinson's patient maintain their independence by providing them with techniques to deal with movement issues, e.g. when getting in and out of bed, a chair or a car, as well as strength and balance training to help with movement difficulties and preventing falls. A physiotherapist will also be able to tailor an exercise and fitness programme for the patient.[2]

Meanwhile, occupational therapy provides practical advice and methods for patients to carry out their ADL, while coping with symptoms like tremors, anxiety, fatigue and difficulty in communicating. Among the ways an occupational therapist can help those with Parkinson's are demonstrating different methods of accomplishing daily tasks, like buttoning up a shirt or putting on make-up; recommending practical changes to the house or furniture arrangement to take into account their symptoms; and helping the patient develop strategies to cope with ADL that might become more difficult as their disease progresses in the future.[3]

For patients in the early stages of Parkinson's, a speech therapist will help them maintain their ability to communicate for as long as possible. In the more advanced stages of the disease, the therapist will be able to suggest techniques and tools to help ease communication. In addition, speech therapy also helps the patient with eating problems like difficulty chewing and swallowing, or drooling. This form of therapy also provides tips to caregivers and family members of the patient on how best to communicate with the patient, as well as warning signs of when the patient may be experiencing eating difficulties.[4]

While exercise is an important part of a healthy lifestyle, it is of particular importance to those with Parkinson's disease, as it helps them maintain their balance, mobility and ability to perform ADL.[5] The earlier a Parkinson's patient starts a regular exercise routine, the longer they will be able to maintain a better quality of life and delay progression of their symptoms. While there is no one "right" workout regime for Parkinson's patients, each person should ensure that they cover the fitness elements of strength training, aerobic activity, flexibility, agility and balance for the best results. Tai chi and yoga in particular have been shown to help with balance, flexibility and mobility in patients with Parkinson's.[6]

When it comes to diet, there is no one food or combination of foods that have been proven to help with Parkinson's disease. However, simple modifications to what a patient eats can help to alleviate some of the symptoms they are experiencing. For example, constipation can be ameliorated by increasing the amount of fibre in one's diet and by drinking lots of water, while low blood pressure and its accompanying symptoms like dizziness upon standing up, can be managed by increasing the amount of salt in one's diet and eating small, regular meals. For patients with difficulty eating, their foods might have to be softer in texture, while also nutrient-rich to ensure that they are getting sufficient nutrition.

There are also various aids available that can help to make life a little easier for Parkinson's patients. For example, walking sticks, walking frames, grab rails and handrails can help with moving around outside or inside the house, including while using the toilet or shower. Satin or silk sheets or pyjamas can help patients slide onto and out of bed more easily. There are also all kinds of modified eating and kitchen utensils, like spoons, forks, cups, plates, bowls and non-slip table mats, that can help make eating easier for a Parkinson's patient. Other simple modifications include putting rubber bands around items to provide a better grip and using magnets or Velcro instead of buttons on clothes.

One other symptom of Parkinson's disease that can have a major impact on quality of life is urinary incontinence, where the patient is unable to fully control the passing out of their urine. This is due to the disruption in communication between the brain and the bladder due to low dopamine levels.

The types of urinary incontinence Parkinson's patients might experience are urge incontinence and nocturia.[7] Urge incontinence occurs when a person gets that urgent need to urinate, but is unable to control themselves from urinating before they get to the toilet. Meanwhile, nocturia is the abnormally frequent need to get up and pass urine during the night while you are asleep.

As can be imagined, urinary incontinence can have a negative impact on a person's mental and social health. It is not unusual for such persons to experience feelings of shame, embarrassment, social isolation, loneliness and loss of control, as well as body image issues. The lack of ability to control their urination will cause them to limit their social activities outside the house for fear of wetting themselves unintentionally, resulting in social isolation and loneliness. They also tend to reduce or stop working out as high-impact exercises can lead to involuntary leakage of urine. These issues are further compounded when the person is also struggling with other symptoms of Parkinson's disease, and can lead to mental health issues like depression and anxiety.

Urinary incontinence can also be difficult to deal with for caregivers. The financial burden of continence care, the relationship changes that happen and the social isolation enforced upon them can affect the caregiver negatively.[8]

For a start, the patient can "train" their bladder by establishing a regular routine of going to the toilet, e.g. after every meal. They should avoid drinking any beverages starting two hours before bedtime, as well as minimise their intake of caffeine, gassy drinks and alcohol as these can stimulate urine production. Wearing clothes that have less buttons or zips, and can be easily removed quickly, can also help Parkinson's patients who struggle with both difficulty in movement and urinary incontinence.

In addition, there are various products available for those with urinary incontinence to help manage their condition. These include bed pads, mattress protectors, male incontinence sheaths, and incontinence pads and pants.

Based on their ADL care concept, which has six levels (ADL 0-5), CERTAINTY helps users to choose the right type of adult diaper based on their level of mobility. Currently, there are four different types of CERTAINTY adult diapers. The CERTAINTY DryPants and CERTAINTY SuperPants cater to those who can walk or move around independently or with minimal walking aids respectively. Meanwhile, the CERTAINTY MaxPants are for those who require assistance moving around, while the CERTAINTY Tape is specially designed for bedridden patients.

Through understanding their customers and the general needs of Malaysians, CERTAINTY strives to provide viable solutions to incontinence and eliminate the social stigma of using adult diapers. Families and caretakers are now able to take care of incontinence needs, while feeling secure and confident about living a healthy life again.

The reviews and opinions expressed here are those of the authors and do not necessarily reflect the official policy or position of Disposable Soft Goods Sdn Bhd.

Disposable Soft Goods (DSG) started its operations in Malaysia with the setting up of Disposable Soft Goods (M) Sdn Bhd in October 1995, a company involved in the distribution of disposable baby and adult diapers. In July 1999, DSG set up its manufacturing plant, DSG (Malaysia) Sdn Bhd, in Glenmarie, Shah Alam, Selangor. In 2013, DSG shifted to a fully integrated warehouse and manufacturing facilities located at Teluk Panglima Garang, Kuala Langat, Selangor.

On 26 September 2018, Unicharm Corporation, a leading Japanese international company that manufactures disposable hygiene products, specialising in baby diapers, adult incontinence care, feminine hygiene, pet care and clean & fresh, acquired DSGT and its subsidiaries, including DSG Malaysia. The management team of Unicharm and DSG has since been working collaboratively to accelerate the growth of DSG's business.

From a start-up with a total workforce of only 57 employees, the company has grown and expanded its business operations to a workforce of more than 350 employees in 2020. DSG's key brands are CERTAINTY for adult diapers, PetPet and Fitti for baby diapers.