Produced by the Group's indirect wholly-owned subsidiary, Zip Cinema, #ALIVE will be headlined by Spackman Media Group's Yoo Ah-in of DEFAULT (2018) & BURNING (2018) and Park Shin-hye of MEMORIES OF THE ALHAMBRA (2018) and THE DOCTORS (2016) Distributed by Lotte Entertainment and directed by Jo II Hyung, #ALIVE is based on an original scenario by Hollywood writer Matt Taylor

SINGAPORE - Media OutReach - 28 May 2020 - Spackman Entertainment Group Limited ("Spackman Entertainment Group" or the "Company" and together with its subsidiaries, the "Group"), one of Korea's leading entertainment production groups, wishes to announce that #ALIVE produced by the Company's indirect wholly-owned subsidiary, Zip Cinema Co., Ltd. ("Zip Cinema") is expected to be released on 24 June 2020 in Korea. The movie is Zip Cinema's upcoming project following, CRAZY ROMANCE, which was ranked as the best romantic comedy film last year in Korea. 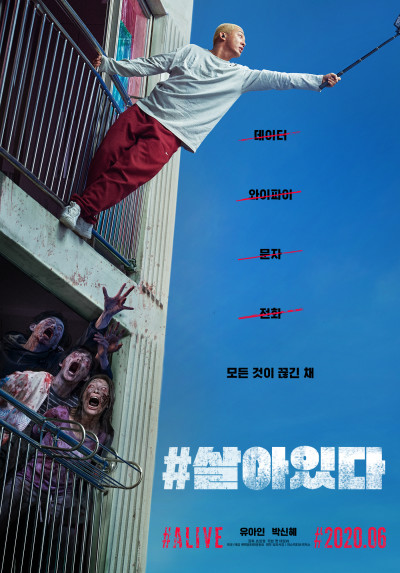 Headlined by top leading actor Yoo Ah-in of UAA & Co Inc. ("UAA"), a subsidiary of the Group's associated company Spackman Media Group Limited ("Spackman Media Group"), and popular actress Park Shin-hye, #ALIVE is based on an original scenario by Hollywood writer Matt Taylor, who produced the American documentary series, SMALL BUSINESS REVOLUTION: MAIN STREET. Yoo Ah-in of UAA was previously the only Asian actor who was awarded one of "THE BEST ACTORS OF 2018" by The New York Times.

The film relates the story of isolated survivors of a city under lockdown that gets out of control as a consequence of a sudden spread of an unknown infection. UAA's Yoo Ah-in of DEFAULT (2018), BURNING (2018) & VETERAN (2015) shall play the role of Joon Woon, a gamer who survived by himself and becomes disconnected from the rest of the world. Park Shin-hye of MEMORIES OF THE ALHAMBRA (2018), THE DOCTORS (2016) & THE HEIRS (2013) takes on the role of Yoo Bin, another survivor who relies on her own survival skills throughout the extremely challenging situation in the city.

The film is distributed by Lotte Entertainment and directed by Jo II Hyung, who was from the American Film Institute.

For more information on #ALIVE and its official trailer, visit the Group's website at https://spackmanentertainmentgroup.com/%23alive.

Spackman Entertainment Group Limited ("SEGL" or the "Company"), and together with its subsidiaries, (the "Group"), one of Korea's leading entertainment production groups, is primarily engaged in the independent development, production, presentation, and financing of theatrical motion pictures in Korea. In order to diversify our revenue streams, we have expanded our business portfolio to include the production of Korean television dramas. In addition to our content business, we also make investments into entertainment companies and film funds that can financially and strategically complement our existing core operations. SEGL is listed on the Catalist of the Singapore Exchange Securities Trading Limited under the ticker 40E.

SEGL's Zip Cinema Co., Ltd. ("Zip Cinema") is one of the most recognised film production labels in Korea and has originated and produced some of Korea's most commercially successful theatrical films, consecutively producing 10 profitable movies since 2009 representing an industry leading track record. Recent theatrical releases of Zip Cinema's motion pictures include some of Korea's highest grossing and award-winning films such as CRAZY ROMANCE (2019), DEFAULT (2018), MASTER (2016), THE PRIESTS (2015), COLD EYES (2013), and ALL ABOUT MY WIFE (2012). For more information on Zip Cinema, do visit http://zipcine.com

The Company holds an effective shareholding interest of 43.88% in Spackman Media Group Limited ("SMGL"). SMGL, a company incorporated in Hong Kong, together with its subsidiaries, is collectively one of the largest entertainment talent agencies in Korea in terms of the number of artists under management, including some of the top names in the Korean entertainment industry. SMGL operates its talent management business through renowned agencies such as MS Team Entertainment Co., Ltd., UAA & Co Inc., Fiftyone K Inc., SBD Entertainment Inc., and Kook Entertainment Co., Ltd. Through these full-service talent agencies in Korea, SMGL represents and guides the professional careers of a leading roster of award-winning actors/actresses in the practice areas of motion pictures, television, commercial endorsements, and branded entertainment. SMGL leverages its unparalleled portfolio of artists as a platform to develop, produce, finance and own the highest quality of entertainment content projects, including theatrical motion pictures, variety shows and TV dramas. This platform also creates and derives opportunities for SMGL to make strategic investments in development stage businesses that can collaborate with SMGL artists. SMGL is an associated company of the Company.

The Company owns a 100% equity interest Take Pictures Pte. Ltd. ("Take Pictures") which has a line-up of several films including STONE SKIPPING (working title), GUARDIAN (working title) and the co-production with Zip Cinema for THE PRIESTS 2.

The Company owns a 100% equity interest in Simplex Films Limited ("Simplex Films") which is an early stage film production firm. Simplex Films has the following films in the pipeline namely, A BOLT FROM THE BLUE, IRREVOCABLE PROMISE and OUR SUPERSTAR K.