HONG KONG, CHINA - Media OutReach - 31 March 2020 - Kaisa Group Holdings Ltd. ("Kaisa" or the "Company", SEHK stock code: 1638, together with its subsidiaries, the "Group"), a property developer established in Shenzhen with a countrywide foothold in China, is pleased to announce its annual results for year (The Year) ended 31 December 2019. 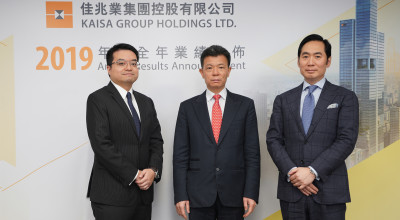 During the Year, contracted sales attributable to the Group was approximately RMB88.120 billion, representing an increase of 25.8% year on year, which met the annual sales target and hit the record high. Aggregated GFA sold for the year was 4,642,075 sq.m., representing an increase of 21.0% from 2018. The average selling price increased by 4.0% year-on-year to RMB 18,983.

It is worth noting that the Group won the bid for a parcel of land for residential use in Castle Peak Bay, Tuen Mun, Hong Kong at the beginning of this year, making the Group's first venture into Hong Kong's residential market. The land, adjacent to Hong Kong Gold Coast and Harrow International School Hong Kong with bright development prospect of infrastructure, is the first land sale launched by the HKSAR Government in 2020. The project occupied a site area of approximately 146,000 sq.ft., with a maximum permissible gross floor area of approximately 583,000 sq.ft., Currently, it takes a 20-minute drive from the project site to Shenzhen Bay, and a 30-minute drive to Central. After the opening of the Tuen Mun- Chek Lap Kok Link, driving from the project site to Hong Kong Airport and Hong Kong- Zhuhai-Macau Bridge will only take 15 minutes. Upgrading of transportation infrastructure in the region will enhance the interactions and synergies between the Group's businesses in different cities, further fortifying the Group's foothold in the Greater Bay Area.

With regards to urban renewal, Kaisa achieved great progress in converting urban renewal projects into land supply during the Year, including 6 projects in Shenzhen, 1 project in Shanghai and 1 project in Huizhou into the Group's land bank. Urban renewal has become an important means of the Group to secure quality land resources in the first-tier and major second-tier cities. In appreciation of Kaisa's efforts and contributions in the urban renewal sector over the years, the Group was granted "1st of TOP 10 Leading Brands of Chinese Comprehensive Real Estate Companies -- Urban Renewal" by the Development Research Center of the State Council, Real Estate Research Institute of Tsinghua University and China Index Academy. The award is also a recognition to Kaisa's active participation in China's urbanisation through urban renewal business as well as its efforts in promoting urban industrial upgrading and enhancing the urban value.

In view of the initially loosened but subsequently tightened financing environment in 2019, the Group on one hand accelerated the collection of sales proceeds from property sales, and on the other hand, remained committed to its goal of lowering leverage that set at the beginning of the year.

In terms of onshore financing, the Group continued to expand the cooperation with regionally renowned joint-stock banks while deepening the cooperation with the existing banking partners. It also continued to explore new financing channels to improve debt structure, lower financing cost and reinforce its cashflow management. During the Year, the Group obtained approvals from the Shenzhen Stock Exchange to issue more than RMB11 billion worth of asset-backed securities ("ABS") and successfully issued ABS backed by income of shipping business, ABS secured by mortgage balloon payments and ABS linked to supply chain financing in an aggregate amount of RMB2.6 billion. The coupon rate of the aforesaid products ranged from 5.4% to 7.5% with a maturity of 1 to 4 years.

Regarding offshore financing, the Group was granted "B1", "B" and "B" issuer rating with a "Stable" outlook by Moody's Investor Services, Standard and Poor's Rating Services and Fitch Ratings, respectively. With its international credit ratings, the Group took advantage of the market conditions by swapping short-term bonds for long-term bonds in order to reduce its exposure to risks associated with short-term debts, rendering support to the rapid development of the Group. In particular, the transaction of the Group's US$400 million senior notes due 2022 issued in October 2019 under Securities Act Rule 144A was awarded "Best High-Yield Bond in 2019" by The Asset, an internationally renowned magazine. This issuance is not only the Group's first issuance of senior notes under Rule 144A since 2014, but also the first issuance of senior notes by a Chinese real estate enterprise under Rule 144A since 2015. The overwhelming response of this issuance also reflected the market's strong confidence in Kaisa.

In February 2020, leveraging on the Group's prudential financial management and determination in reducing its financing cost, the Company successfully issued US$400 million 6.75% senior notes due 2021 to strengthen its capability to withstand adversity. Other than this, the Group has also established good business relations with offshore commercial banks. The Group successfully obtained financial support for its newly acquired project in Tuen Mun, Hong Kong, which further strengthened the foundation for its offshore funding channels. During the Year, the Group repurchased short-term senior notes in an aggregate amount of US$736 million through tender offer and buy back, in order to manage its debts in a proactive manner.

Looking ahead, Mr. Kwok Ying Shing, Chairman and Executive Director of Kaisa Group, said, "While the impacts brought by the coronavirus epidemic and volatile US-China trade relations could undermine the steady growth of China's economy, it is believed that the Chinese government will overcome the challenges facing society through a series of systematic reform as well as financial and monetary policies in the long run, and ultimately, will stabilise employment, finance, foreign trade, foreign capital, investment and expectations. At the same time, local governments will optimise their regulatory policies on certain districts, in order to stabilise the local economy and boost market confidence.

The outbreak of novel coronavirus is expected to exert pressure on the growth of the real estate market in the short run, the Group has made proactive preparations for adversity in light of the current conditions. Pursuant to the government policy, the Group has adjusted its project launch strategy, shifting away from centralized sales launch model. At the same time, the Group organized multiple forms of online marketing, including live streaming, proprietary sales platform wechat mini program, mobile app, and major third-party platforms to facilitate its consumers' online purchasing."

"In view of the current market conditions, the Group will capture opportunities in land replenishment by prudently participating in bidding, auction and listing as well as acquisition and merger, in order to maintain solid cash flow. In the meantime, the Group will continue to strengthen its capital and budget management, optimise cost and expense management, and explore low-cost and diversified financing channels."

Having established its home base in Shenzhen, Kaisa has been expanding its presence in the Greater Bay Area over the years. With footholds in Shenzhen, Guangzhou, Hong Kong, Huizhou, Zhuhai, Foshan, Dongguan and Zhongshan, the Group's businesses also cover the economically vibrant cities in such regions as the Yangtze River Delta, western and central parts of China and the pan-Bohai Rim. As at 31 December 2019, the Group's land reserves in the Greater Bay Area accounted for 51% of its nearly 26.8 million sq. m. land bank. By virtue of its rich experience in urban redevelopment, the Group has secured many high-quality urban redevelopment projects in the Greater Bay Area, mainly in such cities as Shenzhen, Guangzhou, and Zhongshan, which will lay a solid foundation for the Group's future development.