Windows 10: Powering the World with One Billion Monthly Active Devices 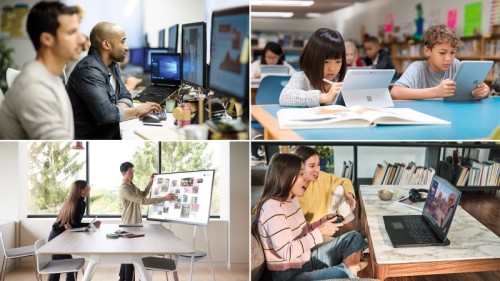 SINGAPORE - Media OutReach - 19 March 2020 - Microsoft today announced that over one billion people have chosen Windows 10 across 200 countries resulting in more than one billion active Windows 10 devices. Since its release in 2015, every new build of Windows 10 has seen customer satisfaction improve through fixes, new capabilities and experiences for customers to benefit from a secure, reliable platform.

With 100 percent of the Fortune 500 now using Windows 10 devices, it has become a critical platform for driving business transformation in the enterprise and beyond. In addition, one in seven people, from developers, business professionals, students and families are planning, creating, ideating, executing, and doing great things with Windows 10. More companies are also transitioning from older operating systems to Windows 10 as part of their commitment to running the business more efficiently and securely, positioning themselves to offer better products, services and solutions to their customers.

From one to one billion devices

"With Windows 10, our focus has always been to put the customer at the center, to listen to feedback, and to have that feedback shape the development process. One of the strongest examples of this customer focus is our Windows Insider Program which now has over 17.8M Insiders in every country of the world," said Yusuf Mehdi, CVP Modern Life, Search and Devices, Microsoft. "We have also strived to make Windows an open, inclusive, and accessible platform that can empower everyone to achieve their goals. Our Windows Accessibility team focuses on human-centered design, a method where engineers and designers work to deeply understand peoples' needs, and then co-design and continuously iterate on solutions directly with them".

Users can expect new Windows 10 features and security updates to be delivered faster, with the duration evolving from a version every 3 years, to multiple versions per year. The recent decoupling of the new Chromium-based Edge browser from Windows 10 has also enabled the delivery of new builds to customers outside of the normal Windows 10 release cadence -- and to more versions of Windows.

From PCs, to Mixed Reality, Xbox and more

Windows 10 is also the only operating system globally that runs in over 80,000 models and configurations of laptops and 2-in-1s from over 1,000 different manufacturers. The operating system also powers Windows Mixed Reality, Microsoft HoloLens and the entire Xbox family of consoles, including the latest Xbox Series X, which will be available later this year -- transforming the way people build, design, learn, play and experience the world around them.

The operating system has also enabled new categories of device creation including Surface Pro, Surface Book, and Surface Hub 2S; and will power future devices such as Surface Neo, a dual-screen device that will run Windows 10X, presenting users with unique experiences on multi-posture dual-screen PCs.

Windows is a diverse and powerful canvas that gives Microsoft's OEM partners the flexible tools they need to deliver innovation to the world. This can be seen in their latest devices such as the Acer ConceptD 700 workstation, ASUS ExpertBook B9, XPS 13 from Dell , HP Elite Dragonfly, Lenovo Yoga Slim 7 and the Samsung Galaxy Book Flex α.

As a pioneer in seamless touch and pen experiences, biometric log-in with Windows Hello, touch-to-dial apps like Your Phone, to enabling Android users to connect their phone to their PC -- the Windows innovation will continue. Microsoft envisions Windows to be the most accessible operating system, and though Azure cloud, users of Mac, iOS or even Chromebooks will be able to enjoy the benefits of Windows.

"Reaching a billion people with Windows 10 is just the beginning. We will invest in Windows not only within Windows 10 for PCs but also across many other Windows editions, serving diverse customer needs including Windows IoT, Windows 10 Teams edition for Surface Hub, Windows Server, Windows Mixed Reality on HoloLens, Windows 10 in S mode, Windows 10X and more." said Mehdi.

Microsoft (Nasdaq "MSFT" @microsoft) is the leading platform and productivity company for the mobile-first, cloud-first world, and its mission is to empower every person and every organization on the planet to achieve more.