TAIPEI, TAIWAN - Media OutReach - 2 August 2019 - The Taipei 2020 the 38th Federation of Inter-Asian Philately (FIAP) Asian International Stamp Exhibition opens at the Hall 1 of Taipei World Trade Center Oct. 23-27 in 2020. As a cordial invitation to the world's philately lovers, the host Chunghwa Post, Taiwan's national postal service, organized a delegation led by its President Chiang Jui-Tang to promote the Taipei event during the 2019 36th Asian International Stamp Exhibition in Singapore. On the evening of Aug. 1, a special "Taipei Night" banquet to promote the 2020 FIAP exhibition was held at Conrad Centennial Singapore. A total of 300 guests including Taiwan's representative to Singapore, officials of Fédération Internationale de Philatélie (FIP) and Federation of Inter-Asian Philately (FIAP), referees, commissioners and representatives of postal administrations, stamp dealers and members of the overseas Taiwanese community all attended in the event. 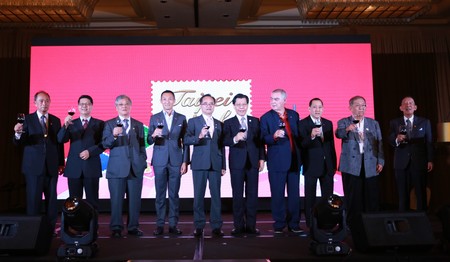 From left to the right-

The Taipei Night banquet continued the theme "IN ． Taiwan" with carefully designed programs such as sound of Taiwan, a blessing ceremony and Taipei Feast to present tribal music, the ritual of blessing and Hakka's Pounded Tea (Leicha) culture of Taiwan. According to Chunghwa Post, Taiwan has cultural diversity, beautiful views and rich ecological resources as well as world-renown food scene. This event is aimed to promote Taiwan and invite interested parties to attend the Taipei 2020 the 38th Federation of Inter-Asian Philately (FIAP) Asian International Stamp Exhibition and personally experience the beauty of Taiwan. All are welcome to come to Taiwan for the "Wandering in the Stamp World" and experience the charm of Taiwan

An area for early bird promotion was designed to encouraged advanced registration from international exhibitors, offering a chance for pre-event communication to understand the needs and expectations of interested parties. Chunghwa Post hopes that Taiwan is able to maintain a friendly bond with international philatelic circles through hosting the Asian International Stamp Exhibition once again while improving Taiwan's visibility in the world stage. The Taipei 2020 38th Asian International Stamp Exhibition certainly will be an exceptional exhibition and welcomes all to visit Taipei next year.