Avengers: Endgame is most Tweeted about movie ever with more than 50 million Tweets since the start of the year

*Spoilers ahead for Avengers: Endgame*

SINGAPORE - Media OutReach - 2 May 2019 - After 11 years and 22 Marvel movies, Avengers: Endgame marks the end of an era. Since its release, fans all around the world have been turning to Twitter to talk about #AvengersEndgame. In addition to setting records at the box office, Avengers: Endgame also became the most-Tweeted about movie ever on Twitter with more than 50 million Tweets since the start of the year, of which nearly half came during the past week.

Here are some of the top fan Tweets in the past week that show their love for the Avengers and the impact the movie has on pop culture around the world: 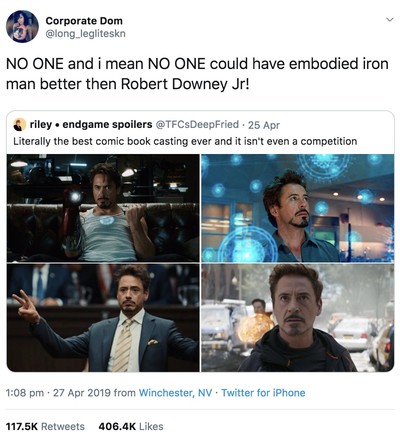 And of course, several of the original Avengers Tweeted their love right back at their fans and shared their favourite moments about playing these characters: 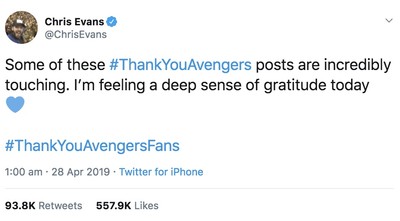 Here are the most talked about characters in the movie. While #Thanos was most discussed as the big baddie in the movie, the big surprise is #Thor beating out #IronMan - must have been something to do with his "new" look in Avengers: Endgame.

These are the countries that Tweeted the most about the movie. It's clear that the Americans and Brazilians share a passion for talking about the Avengers on Twitter, while the movie was wildly Tweeted-about in Asia Pacific as 5 of the top 10 markets come from that region.

#AvengersEndgame concludes the Marvel Cinematic Universe' #InfinitySaga storyline, and the Marvel fandom have been flocking to Twitter to express their love and appreciation with the #ThankYouAvengers hashtag.

Meanwhile, the cast and directors of the movie mounted a #DontSpoilTheEndgame campaign urging all fans to give one another a chance to have the same emotional experience when watching the move for the first time:

The hashtag #DontSpoilTheEndgame has since trended globally, with fans (mostly) abiding by the rules and keeping their silence. Dedicated fans who have yet to catch the movie have gone to great lengths to remind others to stay spoiler-free:

In this age of smartphones and social media, it's almost impossible to avoid Twitter, so some fans resorted to muting related keywords instead:

Here's how you can mute certain keywords to avoid spoilers on your timeline: https://help.twitter.com/en/using-twitter/advanced-twitter-mute-options

Muting is set to a default time period of 'Forever' Users can choose between 'Forever', '24 hours from now', '7 days from now', or '30 days from now' You can view a list of your muted words (and unmute them) in your settings. Remember to unmute the keywords after watching the movie, so that you can join the #ThankYouAvengers conversation on Twitter!

Twitter, Inc. (NYSE: TWTR) is what's happening in the world and what people are talking about right now. From breaking news and entertainment to sports, politics, and everyday interests, see every side of the story. Join the open conversation. Watch live streaming events. Available in more than 40 languages around the world, the service can be accessed viatwitter.com, an array of mobile devices, Twitter Lite (mobile.twitter.com), and SMS. For more information, please visitabout.twitter.com, follow @TwitterSG and theSouth East Asia blog; and download both the Twitter and Periscope apps attwitter.com/download andperiscope.tv.