SINGAPORE - Media OutReach - 2 March 2017 - PSB Academy's reputation as the Future Academy received strong affirmation from Singapore's apex chamber for public relations practitioners when the academy was conferred the esteemed merit PRISM award for its "Outstanding Corporate Reputation Programme" in Singapore. Other nominees for this category include Landlease Asia and 3M. 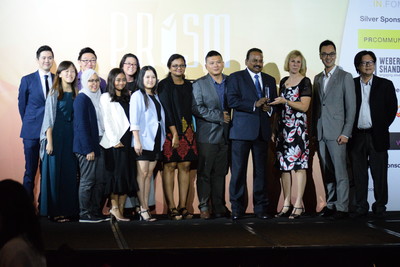 Robert Conceicao, President of the Institute of Public Relations Singapore said: "The PRISM award stands for Public Relations in the Service of Mankind and there is no stronger testament to this spirit than the conferment of a PRISM award on an education institution whose very mission is to improve the lives of its students and the broader community. PSB Academy is not only a heritage brand, it is today an invigorated icon of Singapore's brand of education that is geared towards the Future Economy. We hope that PSB Academy's momentum in reputation building will continue to inspire others to pursue excellence in this regard, for the greater good."

PSB Academy Executive Chairman Viva Sinniah shared: "We are honoured to be recognized amongst some of the best organizations in Singapore because it validates our ongoing mission of being an Academy of the Future. Quality -- both as an education institution and as a brand -- will continue to be the nexus for an academy that is fully attuned to the needs of the Future Economy. Our reputation is a reflection of our actions, and we are committed to expanding on this nexus for the interest of our students and the broader community."

Launched in 2016, PSBA's "The Future Academy" initiative reflects the academy's renewed mission of preparing aspiring graduates for the future workforce.

To that end, PSBA has been forging close industry ties with leading organizations to ensure that its learning journeys are bolstered by relevant industry skill-sets. These firms include, Ogilvy and Mather, Rolls Royce, Cisco Systems, to name a few; as well as establishing student chapters with apex bodies such as the Institute of Public Relations Singapore and the Institute of Engineering and Technology, to provide students with first-hand access to thought leaders.

Secondly, the academy has introduced new programmes that are geared towards the needs of the new economy. These include pioneering diploma programmes in sports and exercise science, supply-chain management as well as in media and communication to help more full-time workers deepen their skillsets through flexible modes of study. It also unveiled a Master of Science in Engineering Business Management from Coventry University, UK's Modern University of the Year (The Times and The Sunday Times Good University Guide 2014, 2015 and 2016),to prepare more professionals in STEM (science, technology, engineering and mathematics) to enter leadership ranks in their respective organizations.

Finally, PSBA announced expansion plans of a $15 million campus in Marina Square, which will be fully opened in the second quarter of 2017. The campus will host around 7,000 students and occupy more than 100,000 square feet in the heart of the city. It aims to push boundaries in learning by harnessing technology, and bringing together industry, research and academia to help workers and aspiring graduates alike thrive in Singapore's Future Economy.

PSBA's PRISM conferment for "Outstanding Corporate Reputation Programme" comes at the heels of other recent industry accolades including, "Best Private Education Institution in Singapore 2016" by the Business and Excellence Research Group and "Best Private School for Engineering in Singapore in 2016" by JobsCentral Learning T.E.D Awards.

PSB Academy Vice President of Corporate Communication, Marcus Loh said: "In a world that is accelerating toward threads of mistrust in institutions and authority, the importance of having a good reputation is today amplified like never before. The Future Academy, like Singapore's Committee for the Future Economy, has an almost-impossible task of preparing our workforce for the future, simply because no one knows what the future holds. Yet our students can be assured that through strong industry ties, future-forward programmes and investments in learning innovation, PSB Academy's graduates have emerged prepared for the workforce: In 2015, idstats research found that nine in 10 of them found employment within six months of graduation while six in 10 of them benefitted from pay raises or better career prospects. We are committed to expanding our nexus of quality education and will do our best to prepare workers and our young for the Future Economy."

Productivity is at the heart of PSB Academy. Once known as Singapore's Productivity and Standards Board, PSB Academy is known today as "The Future Academy", with an approach to education that focuses on what really matters: performance in the real-world.

In 2016, The Academy was conferred "Best private education institution in Singapore" by the Business Excellence and Research Group, and "Best private institution" for Engineering at the JobsCentral Learning T.E.D Awards. It hosts over 11,000 local and international students in its slate of certificate, diploma, degree and postgraduate programmes every year.